One of the strongest emotions of the wedding day is surely the moment in which we exchange the first glimpse of the arrival in the church, before going down the aisle with the wedding dress to reach the future husband. This emotional moment is followed by a further moment of emotion that establishes the union between spouses: the exchange of faiths. Exchanging the wedding rings during the ceremony is a gesture full of solemnity that almost always brings with it so much emotion for the spouses and for all the people present; it is the moment in which a pact of love is sealed to be observed for eternity. Among the various wedding phrases we would certainly have learned anecdotes related to the faiths, but what is the true meaning behind these famous rings?

The word faith comes from the Latin Fidem and means trust, so there could be no more appropriate name to give to the symbolic rings of marriage, because it is really trust that we speak when we are about to become a husband and wife, a mutual exchange of esteem, trust, respect and above all love, with the promise that lasts forever. 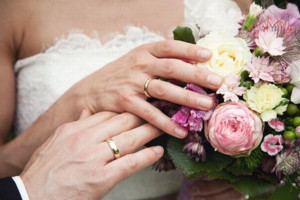 Wedding rings are the symbol of marriage not only for modern civilizations but also for older ones such as barbarians; these populations exchanged the famous rings as a sign of a promise of marriage and loyalty. Later in Roman times the rings, made of iron, were intended to seal promises of marriage but were worn only by men; but soon it was also granted to women. The Romans called vinculum the marriage ring and anulus pronubus the one for the promise.
During the Middle Ages, however, women used to weave their hair and that of their future husband around the ring and held it for 9 days on their chest at heart level before exchanging it on their wedding day, in sign of love and loyalty. And it is from the sixteenth century that the marriage ring takes on the appearance and meaning that we still attribute to it today. It is in this period in fact that the wedding rings are forged in yellow gold, always a symbol of eternity for the Catholic religion, and within them we begin to see the first engravings with the name of the couple and the wedding date 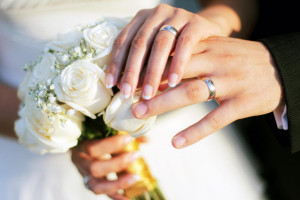 The wedding rings in white gold or platinum

A curiosity about the wedding rings concerns their placement on the ring finger of the left hand. There are two origins on this tradition: one concerns the Catholic religion, according to which the celebrant with the first three fingers of the left hand indicates: “In the name of the Father, the Son and the Holy Spirit” and the fourth finger, the blessed one, s ‘insert the ring. The second tradition, however, believes that the wedding ring should be put on the left ring finger because from there the vein of love that leads straight to the heart would pass, a much more romantic and suggestive explanation.

This does not mean that in many countries of the world faith goes to the right hand and in some cases, until recently, to the thumb instead of ring finger, but whatever its place on the hand, its meaning remains undisputed for all the spouses: trust and eternal love! 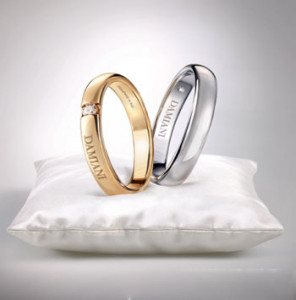 A collection of jewelry designed exclusively for the special moment of marriage. The goldsmith’s Maison Damiani, with its collection of wedding rings, has redesigned and updated the classic conception of faiths, giving life to new and unforgettable rings, symbol of a promise of love and a timeless union.Damiani has created a rich collection of wedding rings in white, pink, yellow or platinum gold, with a perfect fit thanks to the original “comfort fit” design.

All models can be further customized thanks to the possibility of engraving the Damiani logo also on the outside. The Damiani wedding rings represent the “collection of jewelry forever” par excellence, also because they conceal within them a small diamond that emphasizes the uniqueness and eternity of such an important moment as the wedding day. A precious secret intimate and complicit as the feeling that unites the couple, a diamond that in some rings can also be embedded outside. The Damiani wedding rings, the most important choice of your life.